I'm moving my blog over to http://mach_5.wonderfulfailure.com/ thanks for reading, and please come check it out!
Posted by Mark Handford at 11:14 PM No comments:

So we ended up with just 4 players at the tournament (there was potentially 6-8 players but I guess none of the "maybe's" could make it).  Between a late start and me pimping my new Puppet Wars game we only ended up playing 2 Malifaux rounds.  So it ended up as more of a Wyrd game day than a true Malifaux tournament, but tons of fun was had by all.

In game 1 I was introduced to the Zoraida/Collodi duo.  Lesson #1, Steal Relic is a poor choice for anyone against Zoraida.  Not really sure what I was thinking there.  I lost this game mostly due to the scheme I chose (and the other I gave up for extra SS), as otherwise my crew performed very well against them.  Zoraida/Collodi successfully accomplished Bodyguard and Breakthrough, and we tied the strategy (witch's cauldron scenario from Halloween 2010).  We each had 2 Stitched and all 4 were eradicated by the end of round 2 (mostly killing each other), which was pretty hilarious to watch.

In game 2 I faced Colette in the Carver scenario.  This game fell apart for Colette in round 3 as between herself, Cassandra, and the Coryphee they burnt through all their soulstones in one round of defending against Pandora and her crew, and then when the Carver activated at the end of the turn he was able to charge Colette and cut her into many fine pieces.  Turn 4 saw the death of the coryphee and later Cassandra also at the hands of the Carver.

Amidst all that we got in a handful of games of Puppet Wars and had a blast.  I've just got the main box set right now, but will likely pick up the multiplayer box and boosters sometime in the near future.  As it was mentioned on the Gamers Lounge I decided to go the easy route and prime the puppets white and do an ink wash of each puppet's faction colour and the results are pretty good.  It really helps bring out some of the neat details of the puppets with a minimum of effort.
Posted by Mark Handford at 10:37 PM 2 comments:
Labels: Malifaux, Puppet Wars

Nightmare Teddy is now done.  I ended up dipping the fat kid as well, and he turned out ok.  But Teddy I think is pretty awesome for the incredibly short amount of time spent on him.  I spent perhaps another half hour touching up highlights and cleaning it up post-dip, so a little over an hour of paint-time start to finish. 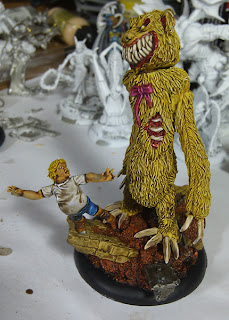 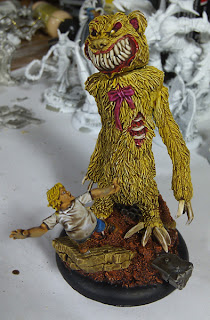 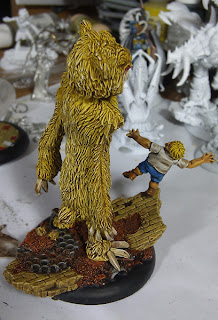 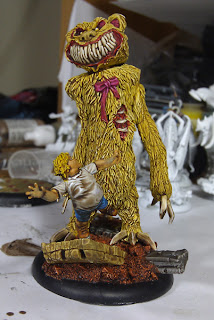 As for the Halloween tournament this weekend, I'm bringing Pandora.  Nightmare Teddy needs to get some games in!  For the 50ss pool I'm pretty much just taking a selection of what I have painted (except the two stitched togethers, they'll be ready by Sunday).  The 50ss is:
Teddy
Doppleganger
Candy
Kade
Stitched Together
Stitched Together
Insidious Madness
Sorrow
Primordial Magic
I'll try to get lots of pictures at the tournament and do a little recap sometime next week.
Posted by Mark Handford at 10:32 PM 3 comments:
Labels: Malifaux, Neverborn, Teddy

Going through a bit of gamer (painter?) ADD right now.  Can't decide what to work on.  There's a halloween Malifaux tournament coming up (set master, 50ss pool, 35ss games) and I'm undecided between Nicodem and Pandora.  Nicodem's army is fully painted, but I'd want to get his avatar finished if I were to play him- and that'd be a ton of work I don't think I'll have time for.  Pandora's crew has a lot of finished models, but a few that I'd want to paint up and include in the pool (a few stitched, teddy, etc).

Looking at my Nightmare Teddy I was trying to decide how to tackle painting him and I decided dipping would work out great with him.  Here he is, from primer I spent perhaps 30 minutes splashing on the various colours (from my experience dipping a Beastmen army, lighter colours work much better as a base) and another couple painting on the Army Painter dip.  Once the dip sets, I'll hit it with some Dullcote and then throw in a few more highlights for good measure.  Still to add is the fat kid, who will be falling off the front edge of the base as he tries to flee the Teddy. xD 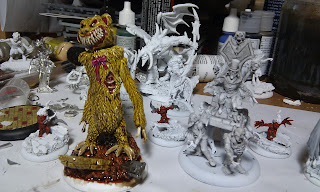 You can also see the Avatar of Decay, now primed and ready to paint with a light black wash to pick out the details, and a few terror tots, who I'm using to test out the method I'll use for red-skinned nephilim.

I may just end up dipping the stitched as well, though I'm not sure the dip would work as well on their smooth surfaces.  They'd definitely require some post-dip highlighting.
Posted by Mark Handford at 12:23 AM 2 comments:
Labels: Malifaux, Neverborn, Nicodem Avatar, Resurrectionists, Teddy

Had some progress on Lilith and crew, but not much to show.  Instead here's my WIP Nicodem Avatar: 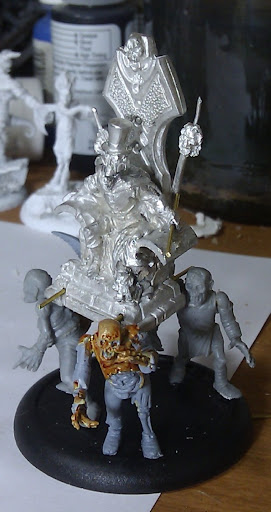 Another update, long overdue.  Thanks to a bunch of free time I had last weekend while administrating a Flames of War tournament, I got a few good hours of work done on Lilith.  Here she is in progress: 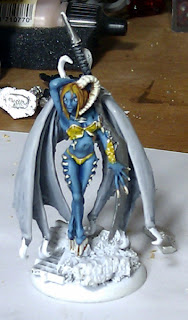 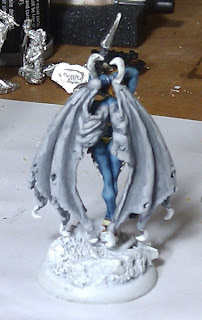 My female Nephilim will all be blue-skinned like this, while the males will be red-skinned (just like Lelu/Lilitu in the book).   Skin, clothing (such as it is), hooves, bone piercings/nails/etc, hair are all done.  The eyes are "good enough", though she has a slight expression of shock.  I've resigned myself to never becoming good at painting eyes.
I am quite pleased with the turnout on the red hair, and though the white highlights on the bikini are a bit glaring in the photo it looks more natural in person and serves to make it look a bright/shiny yellow.   Still to do are the sword (simple basecoat on currently), wing hooks, and base.  I will likely also do a light black wash or two on the wings to smooth out the highlights. 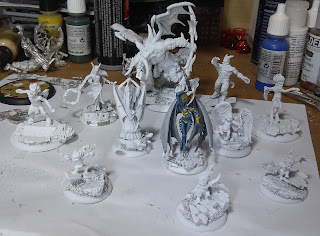 OFCC has come and gone, my workload lately has been a bit crazy so I haven't had time to give it a proper recap.  Since I don't play Fantasy pretty much at all anymore, I was definitely hesitant heading down to Vancouver, WA for a Warhammer tournament, but I haven't missed an OFCC yet and I didn't want to miss this one.

When all was said and done, I must say I had a blast and the tournament was every bit as fun as previous years.  I had 5 games against 5 great opponents, sadly a few of the games saw some unbelievable luck go my way and they ended up being rather one-sided.  Picture a unit of White Lions with a Prince and BSB along with a WL chariot charging my unit of 25 skeletons with my Vampire Lord.  After combat resolution, the skeletons have been wiped out and the Vamp has taken a wound.  In my turn, the Vampire Lord casts summon undead horde to heal himself (and other nearby units), casts with irresistible force, and the miscast result is a 4... the big blast killing the rest of the white lions, Prince, BSB, and wounding the chariot, while my Vampire Lord passes the roll to stay alive. Yeah, that kind of unbelievable luck.

Surprisingly in two games my Vampire Lord died, and died fairly early, but it wasn't the beginning of the end as I recall from editions past.  In both cases having characters in the remaining units helped with leadership so they lost less, the BSB being present also allowed a reroll if necessary.  One of those games I suffered a minor loss against some Daemons of Chaos (who just barely managed to outnumber my grave guard in the 500vp king of the hill scenario), and the other I managed a win against Slaan-led lizardmen.

While I am probably not going out of my way to play Fantasy much in the near future, I just don't have the time to paint big armies or haul them around and play 3 hour games with them these days, I am eagerly looking forward to the next OFCC.  Hopefully I won't be the only Canadian going next time!


Back on the Malifaux front, I've started collecting a Lilith crew (expanding my plethora of Neverborn).  I picked up this Freebooter miniature which I hoped could be my Lilith.  There was some question before purchasing her about whether the scale would work out ok.  I figured if she was just too big for Lilith I'd use her as Nekima or something, she's just so amazing I had to get her.

In the end she's a solid head taller than the average man-sized model in Malifaux, but since her sister Nekima is on a fricken 50mm base I don't see any reason Lilith couldn't be a little taller than average. 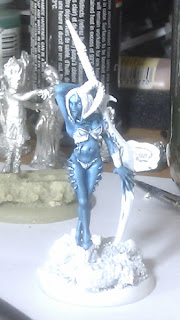 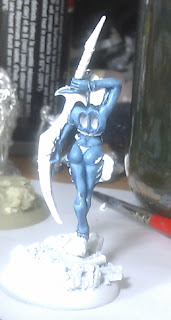 I'm going with a blue skintone on her (and likely will do the same with all my nephilim).  I haven't really done any skin tones other than my usual 'bronzed flesh' recipe and I really liked the look of the Lilitu art in the Rising Powers book, so I decided to try this out.  The base colour is a mix of regal blue and codex gray, then highlighted with multiple layers adding in a bit more white each time.  Finally I added a few light washes of asurman blue and badab black.

Now to figure out what colours to put on the rest of her....
Posted by Mark Handford at 12:25 AM No comments:
Labels: LIlith, Malifaux, Neverborn, Warhammer Fantasy
Older Posts Home
Subscribe to: Posts (Atom)

Join me in an awesome game of survival against the zombie hordes!